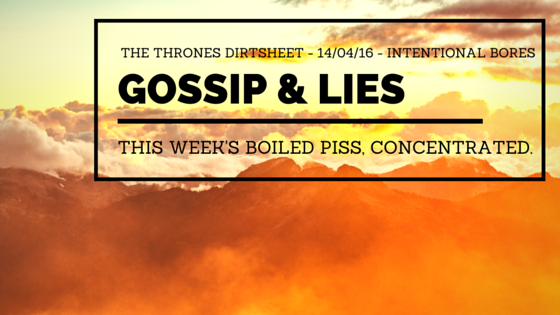 Welcome back to another edition of Gossip & Lies – The Thrones Weekly Dirtsheet.

Just a small bit of house keeping before we get down to the boiled piss. Obviously, last weeks edition missed it’s deadline and didn’t get published. This was entirely my fault, I let my public down and I hold my hand up to that. You deserve better from the fourth estate.

It also, was always in my mind that the first edition was going to say it was weekly, then just be a one off. A good heel is always one step ahead of the crowd, ready to piss them off in a different way as soon they start getting cheers..

But I had quite a long walk home from the pub this week and I’ve probably got enough half jokes about the mad shite people have been doing online to get a full feature out of it this week.

There’s been some more drama this week about Intentional Draws. While I was pitching hot takes to my editor, I told them I had two possible angles on it, but couldn’t decide which one. My editor said they both sound weak as piss, write them both and ironic pre-amble and you might just get away with it.

Sometimes I bring a notepad with me to the weekly Thrones meetup, and am as guilty as any one else for having a quick, mindless doodle during my opponents marshalling phase or while they’re doing challenge maths that I can’t be bothered to work out though.

In a tournament scenario however, intentionally drawing is just not on. It’s disrespectful and it affects your own game. You should be thinking a few turns ahead, not working hard on a sketch or colouring something in.

I can’t imagine ever doing an intentional draw. Mainly because I don’t think I’ve ever had an opponent who I haven’t wanted to brutally murder for the crime of being an adult who plays a card game as a hobby. Utter scum, the lot of you.

Fuck off with yer Magic.

My favourite idiot this week, bravely took a stand on CardGameDB to expose the corruption of the reviewers. They had unfairly rated the card To the Rose Banner! by being so small minded and not considering an illegal combo. Honestly, where do they get these reviewers from?

Said poster did not back down when he was called on his Mad Shite by people much cleverer than me, with the top sass came from Istaril. How was he supposed to know to check the Rules Reference Guide* for a rules question before mouthing off online?

*Full disclosure, I have never read the Rules Reference Guide or the standard rulebook for 2.0 and I’m mouthing off online, which might make me a hypocrite.

All I really want is for Thrones to be more like professional wrestling, which means cards need entrance music. So I’m taking the liberty of having my own gossip column to give every card their theme song.

Cat Stark has recently undergone a gimmick change and come back as a flashier, more expensive card. She is however, still a cat, and as such there’s no better entrance music for Expensive Cat than Shonen Knife’s I Am A Cat.

This is definitely not just an excuse to post a Shonen Knife song because I’m going to watch their gig tonight.

Obviously, writing this fucking nonsense takes a lot of work, if you’d like to support future editions of Gossip & Lies, why not give your money me on Patreon? If that, frankly ludicrous, request is too much for you, you can find me on Twitter as @JackMachin, listen to me talk about wrestling on The “K” Word podcast or check out my band Twin Visions.

Thank you for reading, I’ll (probably) see you next week.