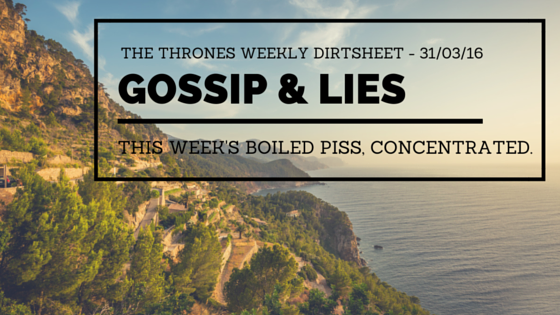 Hello there, and welcome to the first edition of Gossip & Lies – The Thrones Weekly Dirtsheet.

I’m Mach, and much like the image above suggests I’m here to bring you this week’s boiled piss, concentrated.

We’ll be taking a snarky look back over the previous seven days of furious overreactions, wild speculation, spurious gossip and what happens when Banter goes wrong.

In person, the Thrones community is full of some of the nicest, funniest people I’ve ever met. Like everything else,  on the internet the very same community seems to be so much worse.

The AGOT 2.0 discussion group on Facebook is a haven for “Community Discussion & Play,”  about “deck archetypes, builds, theory and more.” And more is what we’re going to talk about here.

There was some confusion on this group, as to whether or not you can set up duplicates of The Arbor. It’s hard to tell where the genuine rules questions stop and the parody posts start. Thankfully though, our beloved and benevolent Facebook group mods swept in with swift, decisive action delivering posts sweet justice like Kevin Costner. They stopped the trolls in their tracks and nothing more was said of it.

Apart from the following all happening:

Who Reviews the Reviewers?

Let me preface this by saying, anyone who takes the time to write any kind of legitimate Thrones related content is a saint, and their efforts should be applauded. However, the latest chapter pack review got the piss boiling like no man’s business.

And which card was it that set everyone off? The Arbor of course. Many felt that the reviews had vastly underrated the card, with no one giving it a perfect 5 out of 5 score.

Another card (The First Snow of Winter) did get a perfect score, and obviously this got people up in arms. The comments devolved into a fairly amusing discussion of how the reviewers underrating and overrating cards at the same time. Fantastic.

Somehow four of the seven million Thrones podcasts (Beyond the Wall, Banter Behind the Throne and Great Beards of Westeros, Wardens of the Midwest) were published on CardgameDB on the same day. I haven’t listened to any of them, because like all good hacks, I don’t need to research what I’m writing about.

They’ve made it to this column however, because the fire brigade did have to be called in as a result  of this sick burn from Dave Bamford ,UK Boro Melee National Champion, Host of Banter Behind the Throne and Generally All-Round Nice Guy on rival podcast host Istaril.

Going through relatively unscathed between all the Arbor drama, former World Champion Greg Atkinson has come out against using Alt Art cards in competitive play. The post was long and Facebook formatting is wank so I didn’t read it. But someone probably got cross about it.

The one shining light in the Thrones Online Community, CardGameDB poster Yeezus, made a triumphant return to his thread “how do i get good at this game?” I’ll be honest, Yeezus is so good he makes me feel sick.

I’ve written over 20,000 words in total about Thrones in the past three years and none of it comes close to this level of brilliance. To try and explain it here wouldn’t do it justice, and would ruin perfect satire with deconstructionalist, navel gazing wankery. Just read that entire thread and subscribe to Tidal.

Come back next week for another pointless waste of time covering the drama, the idiocy, and most importantly, the boiled piss.